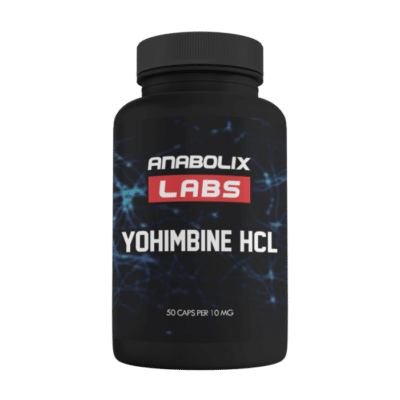 Description of the measure:

It is a product of natural origin that we obtain from the bark and leaves of the African Yohimbe tree. The form of the hydrochloride, i.e. HCL, is a product of chemical synthesis, which was extracted for the first time in the 1950s. This agent gained its worldwide reputation mainly as an aphrodisiac, but it also has other interesting properties not directly related to the growth libido. Yohimbine is also used to increase the loss of fat mass during reduction * 1 + and a slight stimulation * 2 + similar to the effects of caffeine or ephedrine.
Yohimbine is an indole alkaloid, which is an antagonist of alpha-2-adrenergic receptors and increases the secretion of norepinephrine * 3 +, which is a strong stimulating catecholamine, but its action is different from that of adrenaline. Adrenergic receptors are present throughout the body, including adipocytes in adipose tissue. Activation of a certain type of these receptors (Beta 2 and Beta-3) [4], [5], [6] in adipocytes, in turn, causes an increase in cAMP, thus increasing the release and burning of stored adipose tissue. Under normal conditions, the above-mentioned catecholamines act on both alpha and beta receptors, mutually canceling each other’s action. Yohimbine, on the other hand, is a selective alpha-2 adrenoceptor antagonist (inactivator), which inhibits the activation of the suppressive set of receptors and preserves adenylate cyclase activity and beta-mediated effects * 7]. Importantly, alpha-2 receptors are located mainly in the abdomen (supporting the formation of the unwanted mesothelioma), the chest, thighs and hips [8], [9].

There aren’t many studies to support the real use of yohimbine in sport, or outside of it, in humans. Why is it like that? It is possible that the reason is that the cost of the research is very high and a return can only be obtained by selling the product later, which in turn often creates a conflict of interest. There is also anecdotal evidence where famous athletes or coaches recommend this measure * 10 +. However, it should be remembered that this type of evidence is never conclusive. As far as scientific research is concerned, the example * 1 + is known, where 20 elite footballers taking 20 mg of yohimbine reduced their body fat while taking yohimbine from 9.3% to 7.1%. For the placebo group, the level remained at 9.2%, assuming both groups had a strict menu throughout the 21-day intervention period. This means that yohimbine works quite well for elite athletes as the “last straight” on the way to reducing body fat.
Another paper describes the effect of yohimbine [11], where 20 obese patients were subjected to a 3-week low-energy diet (1000 kcal per day), and then randomly assigned to two groups according to the study protocol with a double-blind study: 10 people received 5 mg of yohimbine per os 4 times a day and 10 received placebo for 3 weeks. Yohimbine significantly increased the mean weight loss in patients on a low-energy diet: 3.55 ± 0.24 kg (yohimbine) compared with 2.21 ± 0.37 kg (placebo). In the case of yohimbine, the level of expenditure was kept constant exercise-induced energy and sympathetic nervous system activity. Interestingly, no significant effect of yohimbine on gastric emptying was found – the mean gastric transit time was 42.0 ± 0.4 minutes after placebo and 41.8 ± 0.5 minutes after yohimbine.

They occur mainly when taking huge doses. Personally, as an author, I used doses of 350 mg at a time, which is dangerous to health and which I do not recommend. However, in safe doses (up to 40 mg a day), being a healthy person you will not experience: tachycardia, stomach pain, excessive agitation, nervousness, increased blood pressure, dizziness, polyuria or muscle tremors (occurs from doses of 80-100 mg per day, depending on from tolerance).

Diseases such as: hypertension, hypotension, diseases of the heart, kidneys, liver, intestines, stomach and the nervous system, diabetes. Moreover, it is forbidden to use yohimbine during pregnancy or lactation.

Yohimbine should not be used with carbohydrates due to the effect of insulin.
Well, we do not find any information on this subject in any of the studies that the protocol includes such guidelines. What’s more, during the study * 1 +, the established diet was high in carbohydrates, which effectively eliminates the idea that yohimbine does not work when eating carbohydrates. Additionally, it has not had any effect on the rate of gastric emptying [11].
Yohimbine is dangerous to health [12].
There was no risk associated with taking yohimbine in the indicated amounts, i.e. up to 40 mg per day, divided in portions * 13 +. However, it should be remembered that the dosage, especially in the case of the origin of American supplements, is VERY controversial due to numerous studies showing clear deviations from the standards provided by packaging manufacturers. American manufacturers do not have a realistic way to control the quality of their supplements * 14 +.