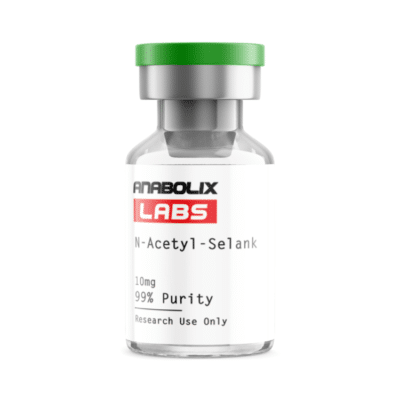 Modulation of the immune system

A synthetic heptapeptide that is derived from the naturally occurring tuftsin peptide in the human body.
It has an anxiolytic and antidepressant effect, thanks to the effect on dopamine, serotonin and norepinephrine. What’s more – it also shows the ability to improve memory processes.
N-Acetyl Selank has no addictive potential and does not affect cognitive functions.
The bottle contains 10 mg of N-Acetyl-Selank
If you need a disposable atomizer, write in the comments to the order and you will receive it for free

Mechanism and profile of action:

The main advantage of using the preparation is its proven anxiolytic and antidepressant effect. People using this preparation emphasize its ability to suppress anxiety and improve concentration. It improves mood, makes it easier to fall asleep, raises mental clarity and increases energy levels.

It has been proven to improve memory, learning processes and serotonin metabolism. It has a positive effect on the increase in the formation of new memory traces and memory storage processes, thanks to the ability to increase the level of serotonin and its metabolites.

Studies show the effect of compensating for long-term hypoxia in the body. Thanks to this, the body is able to regenerate faster after increased effort, increases the level of sensory attention and improves learning processes.

Supports immunomodulatory activity, thanks to the effect of tuftsin. N-Acetyl-Selank is characterized by a multidirectional action that increases the level of the body’s immunity and regulates defense mechanisms.
Select your currency
PLNPolish złoty
GBPPound sterling
EUREuro