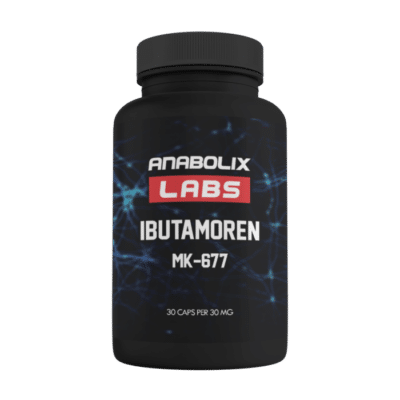 MK-677 is a product aiming at maximising anabolic processes and muscle catabolism prevention. The efficacy of MK-677 has been proven in clinical tests. Due to its high bioavailability in oral administration, MK-677 is considered to be a safer, better tolerated, and equally efficient alternative to intravenous growth hormone.

MK-677, also known as Ibutamoren and Nutrobal, was initially designed for therapeutic purposes in catabolic states, such as sarcopenia in the elderly. However, the high efficiency of MK-677 in stimulating muscle growth and increasing bone mineral density made the substance highly popular in a different target group: bodybuilders and professional athletes.

The functioning of MK-677

Ibutamoren has a mechanism of activity different from other classic substances from the group of selective androgen receptor modulators (SARMs). It is a non-peptide ghrelin receptor agonist with prolonged activity. Ghrelin is a peptide produced in the stomach that participates in the regulation of appetite by affecting the hunger centre. Therefore, by imitating the activity of ghrelin, MK-677 can also increase appetite.

Ghrelin is a ligand for specific growth hormone secretagogues-receptors (GHS-R), whose stimulation promotes the release of somatotropin in the brain, also known as the growth hormone (GH). It exhibits synergic activity with somatoliberin.

Ghrelin probably also exhibits its own, GH-independent anabolic activity. It activates the AKT/mTOR pathway, which plays an important role in signal transmission in places such as the skeletal muscles. Moreover, tests on animal models have shown that ghrelin reduces the expression of myostatin in skeletal tissue. Myostatin is a protein that negatively regulates the growth of the skeletal muscles. Reduction of its activity can, therefore, help to increase muscle mass growth.

Along with ghrelin, MK-677 is a compound stimulating the secretion of growth hormone, called growth hormone secretagogues (GHSs). GH secretion induced by MK-677 leads to an increase in the level of insulin-like growth factor 1 (IGF-1). That, in turn, creates an excellent anabolic environment for bones and muscles.

Somatotropin is a potent anabolic hormone that determines muscle and bone cell differentiation. Most anabolic effects of GH in relation to muscle tissue are exerted through IGF-1, which causes, for example, higher amino acid uptake and increased muscle protein synthesis. That translates into intensive development of muscle mass, strength and definition. Another effect of using MK-677 is increased water retention in the body, which supports body weight and volume growth.

As a ghrelin mimetic, MK-677 has an effect on bone metabolism. It increases bone tissue density and supports its regeneration. The effect of MK-677 on bone structure was demonstrated, for example, in a randomised test conducted on a group of men aged 19-49. After 8 weeks of MK-677 administration, increased levels of bone resorption and formation were observed, which indicates intensified bone tissue mineralisation and support.

Efficient regeneration of the body

MK-677 supports regeneration processes in the body. It helps to make sleep deeper and increase its quality. A test conducted on men aged 18-30 demonstrated that Ibutamoren extended the REM stage of sleep. It can also prolong the deepest, 4th slow-wave stage of sleep. Proper sleep and rest have an important role in anabolic processes, they are crucial for maintaining hormonal balance, reducing inflammation, and normalising cortisol levels.

Ibutamoren also supports musculoskeletal system regeneration, helps to reduce the risk of an injury and accelerates recovery if one occurs. It stimulates the synthesis of proteoglycans and hyaluronic acid in chondrocytes and may reduce the formation of pro-inflammatory eicosanoids, which is important in terms of joint inflammation and injury prevention.

Other metabolic effects of MK-677

MK-677 causes a temporary increase of basal metabolism rate (BMR). Moreover, it helps to increase fasting glucose levels and reduce insulin sensitivity. It has been demonstrated that Ibutamoren can have a beneficial effect on the blood lipid profile by reducing the level of low-density lipoproteins (LDL), also called bad cholesterol.

Initially, MK-677 can cause a temporary increase in cortisol and prolactin levels. However, research shows that cortisol levels become normal after just a week of use (no disparity between MK-677 and placebo).

To sum up, MK-677 is an efficient anabolic-anticatabolic product that allows to increase lean muscle mass, supports bone structure, and enhances regeneration processes in the body.
_____________

First and foremost, bulk!
MK-677 works perfectly when used during the bulk stage and can prove particularly valuable for individuals who find it difficult to gain weight. That is mostly thanks to its potent anabolic properties, but also increased water hydration and better appetite.

Does it work for the cutting stage?
The effect of MK-677 on adipose tissue is still a matter of discussion. Some research suggests that it is able to reduce abdominal fat by a few percent but at the same time it increases overall fat levels in the body, which is caused by such factors as higher blood sugar levels and lower insulin sensitivity.

In order to reduce that activity, it is a good idea to combine MK-677 with metformin or berberine and GW-501516, which normalise carbohydrate and energy metabolism. You can also add the SARM YK-11 in order to further reducer myostatin expression and boost the effect of lean muscle mass or even body recomposition.

Boost anabolism!
Because of a different mechanism of activity, MK-677 is worth combining with other SARMs in order to ensure maximum muscle mass growth. A particularly effective combination is, for example, MK-677, S-23 and RAD-140. Ibutamoren is also often used along with MK-2866 (ostarine) and LGD-4033.

Even more growth hormone!
In order to maximise growth hormone release, a fantastic and highly efficient strategy is combining MK-677 with GHRH analogues: sermorelin, MOD GRF 1-29, or CJC-1295 with DAC. By promoting acetylcholine, the addition of alpha-GPC and huperzine will reduce the activity of somatostatin, which can further intensify the effect of increased GH through a different mechanism.

When and how to use the product

Because of the long activity of MK-677 (24 hours), the product should be used once a day. It is a good idea to take the serving in the morning due to its stimulating properties that lead to higher energy levels, motivation and mental clarity. Research shows that taking MK-677 in the morning is also connected with higher daily GH and IGF-1 levels as compared to its administration in the evening.

While using MK-677, stay on top of your glucose and prolactin levels.