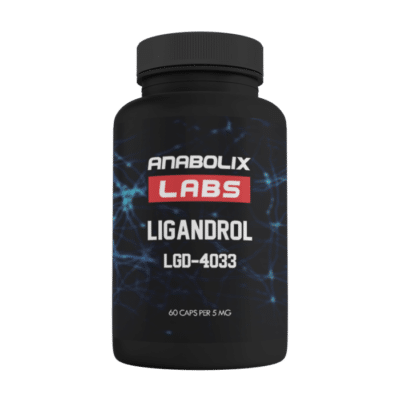 One of the best-tested SARMs on the market!

Has no toxic effect on the liver and kidneys

Does not convert to estrogen and DHT

LGD-4033 is a product distinguished by high effectiveness in promoting anabolic reactions and increasing bone mass and muscle strength. It has negligible effects on the liver, kidneys and prostate, and only gently affects hormonal balance. This is one of the few SARMs whose action has been meticulously scientifically tested, and healthy people also participated in the study.

LGD-4033 is another name for compound 4 – ((R) -2 – ((R) -2,2,2-trifluoro-1-hydroxyethyl) pyrrolidin-1-yl) -2-trifluoroMethyl) benzonitrile. It is also known on the market as Ligandrol – the name was due to the name of the laboratory (Ligand Pharmaceuticals), which synthesized the compound for the first time. This agent belongs to the group of Selective Androgen Receptor Modulators (SARMs), which are ligands that bind to specific androgen receptors. They resemble the therapeutic properties of testosterone, excluding or significantly reducing the side effects associated with the use of this hormone.

LGD-4033 largely meets this assumption – this agent is believed to show potential therapeutic properties in the case of muscle atrophy, and its effectiveness has been documented by numerous studies. In addition, it enjoys unflagging popularity among athletes.

It is thought that LGD-4033 could potentially be used to treat osteoporosis in both women and men. Thanks to the ability to stimulate androgen receptors located in bones, it allows to increase the mineral density of bone and periosteum. Thus, it positively affects bone strength and stimulates bone formation.

Two main mechanisms responsible for such effects can be identified. First of all, LGD-4033 promotes the formation of new osteocytes, and second of all, it prevents calcium resorption from bones. This allows to keep the skeletal system in good condition even in people in which demineralization process has already developed. An improvement in bone mineralization can be seen even at doses of 0.5mg. Compared to other drugs used in the treatment of osteoporosis, this agent has very gentle side effects, provided, of course, that it is taken at therapeutic doses.

It is worth noting that LGD-4033 may be helpful for athletes struggling with bone and joint tissue injuries. It allows for faster recovery after injury and can reduce the risk of injury recurring.

The effectiveness of LGD-4033 in terms of muscle tissue development and exercise capacity is based on a mechanism almost identical to that of anabolic androgenic steroids. This compound has an affinity for the nuclear androgen receptor (AR) located in muscle fiber cells and is its activator. This in turn promotes the production of proteins that build muscle tissue, while increasing the level of ‘tolerated by the body the amount of muscle mass. Thanks to this, LGD-4033 is equally useful both for people affected by cachexia and those who want to break the physiological barriers of their body. People using LGD-4033 to improve sports performance observe additional benefits such as greater muscle roundness and significantly faster recovery. Increase in muscle mass, which athletes obtain with the help of LGD-4033, are at the level of about 1.5-3 kg per month, but it should be emphasized that it is muscle mass of very high quality.

In addition, LGD-4033 significantly affects the ability to generate muscle strength, which has also been documented in scientific research. At the 1mg dose, a certain difference in exercise capacity and strength of the lower limbs was noted, and at higher doses used by high-performance athletes, the improvement of these exercise parameters was very significant. From the entire SARM group, this agent is considered to be the strongest or one of the strongest, and the effects obtained with its help are compared to methandienone – the bioactive ingredient of the legendary Metanabol.

High safety of use

The attractiveness of LGD-4033 results not only from its very powerful action, but also from the safety of use. This agent is not affected by the action of 5-alpha-reductase and aromatase enzymes, and thus helps avoid a significant part of the side effects that accompany the use of e.g. testosterone. It is worth remembering that in the case of treatment with testosterone, there may occur a loss of sex hormone secretion, acne, seborrhea, increased aggression, excessive water retention or increased hair loss. In addition, men often have prostatic and mammary gland hyperplasia, as well as testicular atrophy.
maskulinizacji.

LGD-4033 has been documented to be safe for the prostate. In addition, it does not cause oily skin, acne or hair loss. There were no changes in morphotic parameters or blood pressure during its use, which is common in the case of AAS.

This agent also has no harmful effect on the liver. Due to its stability and bioavailability, it reaches high concentration in blood without the addition of a 17-alpha group or earlier methylation. Both of these treatments are used to provide anabolic androgenic agents for oral administration. Unfortunately, they require significant enzymatic activity of the liver and pancreas, and thus may lead to fatty liver or necrosis. It is known that LGD-4033 remains indifferent to these organs, which is reflected in the results of the studies – during treatment, the levels of alanine aminotransferase (ALT) and aspartate transaminase (AspAT) do not change.

In summary, LGD-4033 is a preparation with a similar effect to AAS, while being its safer alternative. It has anabolic effect on muscle tissue and allows to gain strength in a relatively short time. People suffering from osteoarticular tissue damage can benefit from the use of this agent.

What doses should be used?

Studies have shown the beneficial effect of LGD-4033 on adult men at doses not exceeding 1mg. Nevertheless, to visibly improve the amount and quality of your muscles, or to significantly increase your exercise capacity, usually 2mg doses are used.

Due to the relatively long half-life, the agent can be successfully taken once a day. To maintain a stable concentration, it is worth using the product at the same time everyday.

Should preventive measures be taken while using LGD-4033?
LGD-4033, compared to oral anabolic androgenic agents, has very limited side effects. However, it can affect high-density cholesterol (HDL) and triglyceride levels. To prevent this, use a diet with a reduced saturated fat content, but rich in high-quality carbohydrates with a low glycemic index. It is also worth increasing the intake of polyunsaturated fatty acids. In addition, using GW-501516 may be helpful.

What to combine it with?

During the reduction, a reasonable addition to LGD-4033 is the aforementioned GW-501516; Ostarine will also work well, and from the AAS group- drostanalone and testosterone.

When building the strength, power or muscle mass, the agent should be combined with RAD-140, testosterone or nandrolone agents.

Do one need a PCT after the LGD cycle?

High doses of LGD-4033 reduce the level of free testosterone as well as sex hormone binding globulin, thanks to which the level of physiologically active, free testosterone does not change drastically. Studies have shown that after stopping the drug, the male endocrine system returns to homeostasis spontaneously. It is worth noting, however, that in these studies it was used only for 21 days. The stronger the suppression of hormone secretion, the higher the doses were used.

LGD-4033 is on the list of substances banned by the World Anti-Doping Agency (WADA). This means that only non-professional athletes can legally own and use it. If the federation / association to which the athlete belongs or the competition in which he participates is covered by WADA control, it must be taken into account that this agent will be treated as doping.

How long LGD-4033 remains detectable in the body?

This agent has a relatively short half-life, estimated at between 24 and 36h, however, its metabolites remain in the body much longer. This depends, among others on the dose and duration of the cycle. Certainly, the product will be detectable up to 2 months.