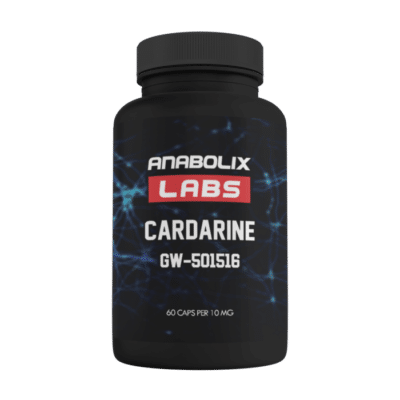 Shows a positive effect on HDL and LDL levels

GW-501516 is an effective agent that affects energy metabolism via PPAR receptors, which results in increased fat breakdown and improved aerobic and anaerobic capacities of the body. Moreover, it can improve the values ​​of numerous health markers, such as a lipid panel or blood glucose level.

GW-501516 also known as GW1516, GSK-516, Endurobol or Cardarine, is a modulator of peroxisome proliferator-activated nuclear receptors (PPAR), mainly PPARδ, but also PPARα and PPARγ. They are located in various spots in mammals’ organisms, and their activation affects the transcription of genes conditioning numerous metabolic processes and the formation of new mitochondria.

A unique weapon against body fat

By interfering with metabolic processes, this agent enables more efficient use of energy substrates, especially within fats. Its action also enables more efficient use of energy stored in fat cells, which facilitates body fat reduction. The agent has also been proven to have the unique ability to change the preferred energy source for skeletal muscle from glucose to fatty acids. This translates into a significantly higher energy consumption from the body stores, i.e. adipose tissue, and, in turn, significantly accelerates the reduction of body weight.

A radical increase in muscle endurance

This product can noticeably facilitate performing aerobic exercises through a powerful spike in endurance. Animal studies have shown that the implementation of GW-501516 already after a week increased the maximal capacity by nearly 75%, which is also confirmed by the effects in people using the product. These effects are a direct cause of the extremely high popularity of GW-501516 among competitive athletes, especially cyclists, but also runners or boxers. In addition, this agent reduces inflammations, which is why it reduces the occurrence of post-workout soreness and allows for increasing the frequency of training of a particular body part. Thus, the product may help to increase the training volume, which further accelerates the progress in a given discipline.

This preparation is an effective way to improve the rate of building high-quality muscle mass through several mechanisms.

Firstly, increased capacity allows for taking your training to a higher level by enabling you to increase the intensity and overall volume of your workouts, which in turn enhances the strength of the stimulus that boosts muscle growth.

Secondly, it has been proved that the use of GW-501516 helps to maintain normal insulin sensitivity and reverses the factors leading to the phenomenon of insulin resistance. When building muscle mass, this is of great importance, because constant maintenance of excessive calorie supply limits tissue sensitivity to insulin, which in turn prevents effective nutrition of muscle fiber. Athletes who have implemented GW-501516 can use diets with higher carbohydrate and calorie content, fully benefiting from their potential, without the fear of impaired insulin management.

Thirdly, Cardarine reduces fat deposition during the mass building process, thanks to which the addition of this compound facilitates the building of excellent-quality muscles.

This substance was initially intended to be used as a drug against hyperlipidemia and diabetes, which results from its action against the markers of these diseases. It significantly reduces the concentration of triglycerides, “bad” cholesterol, i.e. low-density fraction (LDL) and glucose levels. Besides, Cardarine increases the level of “good” cholesterol, i.e. HDL. This is an especially valuable feature because the majority of agents used both to increase endurance and the quality of muscularity show a prothrombotic effect (EPO) or disrupt lipid panel (stanozolol, drostanolone, trenbolone). GW-501516 not only does not cause health problems of this kind but also allows for their reduction when using more invasive agents, additionally complementing their effects through the synergistic action.

To sum up, GW-501516 is an extremely effective agent that allows for a radical increase in endurance, while reducing body fat by interfering with the metabolic processes of both carbohydrates and fats. Implementation of the product fits perfectly in periods with increased calorie supply, during which it allows the appropriate use of calorie surplus and reduces the tendency to accumulate fat.

How to apply and what to combine with?

The preparation is ideally suited for reduction, and, depending on the discipline, its potential may be increased by combining with ostarine, yohimbine or DHT derivatives.

When used during mass and muscle strength building, it will work great with agents from the group of nandrolone and testosterone derivatives, as well as MK-667.

As a doping agent in endurance disciplines, it is often combined with meldonium and emoxypine.

Note that the agent is enlisted as one of the substances prohibited by the World Anti-Doping Agency (WADA).

Using higher doses than the recommended ones may prove to be hazardous to health, therefore it is not advised to exceed the dose of 30mg per day. If you decide to use higher doses, it is advisable to use metformin along with the product.