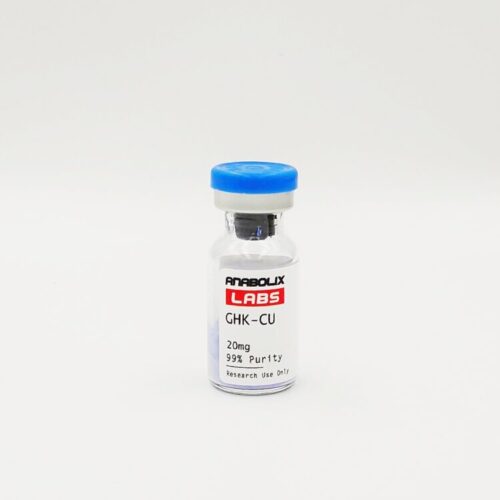 Maximally shortens the healing time of wounds and tissue damage

GHK Cu is a tripeptide with powerful regenerative and anti-aging potential. It is made of a copper molecule and three amino acid residues: L-glycine, L-histidine and L-lysine. Belongs to the group of copper transporting peptides, it occurs naturally in human plasma and saliva, but can also be released from tissues following trauma. This peptide actively promotes wound healing, and its regenerative properties have been observed in case of damage to the skin, lung tissue, bone tissue, gastric mucosa. In addition, it prevents hair loss and stimulates their growth, and thus can solve the problem of baldness.

Scientists have selected several mechanisms of GHK-Cu action. It has been proven that this peptide stimulates the production of glycosaminoglycans (including hyaluronic acid) and stimulates the synthesis of new collagen fibers by fibroblasts. It can also activate stem cells, which have the ability to differentiate into different types of cells, so they are able to replace virtually any damaged tissue. In addition, this peptide is a regulator of the activity of metalloproteinases I and II, responsible, inter alia, for the elimination of damaged collagen fibers and elastin from the extracellular matrix. It has also been observed that GHK-Cu enhances the synthesis of neurotrophic factors (NGF, NT-3, NT-4) and influences the expression of a very large group of genes in the human body. It is also credited with anti-inflammatory and antioxidant effects.
GHK Cu copper peptide is considered to be an extremely effective healing agent
It shows strong regenerative properties, supports and significantly accelerates the healing process of damaged tissues. In addition, it helps to restore the proper innervation of the skin, and thus can prevent sensory disturbances, which are extremely common complications in wound healing. Importantly, this peptide is systemic and does not need to be applied to the site of an injury. Research on an animal model shows that when injected anywhere on the body, it initiates beneficial processes at the wound site, and thus significantly reduces the time needed for tissue regeneration and scarring of the wound.
GHK-Cu has great anti-aging potential.
It can easily be considered a kind of “elixir of youth”, it is recommended to people who dream of smooth, radiant and firm skin. Thanks to the above-described mechanisms of action, this peptide has an excellent effect on the appearance of the skin and reduces the visible signs of aging. It has been confirmed in research that it promotes the smoothing of wrinkles, increases skin density, reduces sagging and contributes to the improvement of skin tone. In addition, it reduces the risk of UV radiation damage to the skin and helps retain moisture in the skin.
GHK-Cu works well in the treatment of baldness
It increases the size of the hair follicles, stimulates hair growth and prevents hair loss. Observations show that minoxidil may be as effective as minoxidil used in the treatment of androgenetic alopecia. It is presumed that this peptide influences the hair growth cycle, namely the third phase (telogen), which is the resting period of the hair follicle. Under its influence, the telogen phase is shortened and the anagen phase is activated, i.e. intensive hair growth.

According to scientists, it can prevent age-related adverse neurodegenerative changes, and thus protect against memory impairment and cognitive impairment in seniors. The antioxidant and anti-inflammatory potential of the peptide plays a major role here. It should be remembered that oxidative stress and chronic inflammation are the main risk factors for the development of neurodegenerative diseases. But that’s not all – the scientists emphasize that in the case of GHK-Cu, the ability of a peptide to regulate the expression of a large group of genes may play an important role. Among them are those responsible for the development and maintenance of neurons in good condition.

There are no official studies that would allow to determine an effective, minimum dose of GHK-Cu. It is assumed that the most effective route of peptide administration is through injections, although there are also creams, capsules, sublingual tablets and nasal sprays containing GHK-Cu on the market.
The standard dose used in aesthetic medicine is 1.5-2 mg daily by injection (subcutaneously or intramuscularly) for about 30 days. This cycle is repeated once a year.
It has been established that for a person weighing 70 kg, the lethal dose of GHK-Cu is 21,000 mg.
During the treatment, the level of copper in the body should be systematically monitored. It is also worth limiting your consumption of copper-rich foods.
Store in a dry and cool place at 2-8 degrees Celsius.