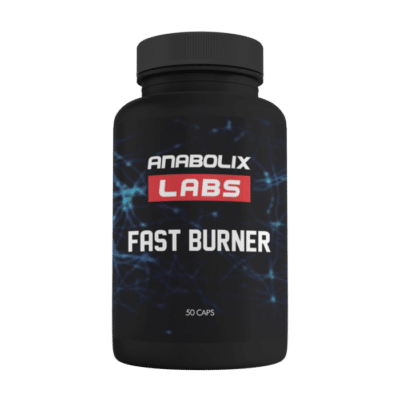 Fast Burner is an advanced product with synergistic ingredients which stimulate fat-burning processes in multiple ways. This preparation has strong stimulant, fat-reducing and appetite-suppressing effects.

This unique formula, based mainly on natural ingredients, helps lose excess fat through several mechanisms. The main one is multipurpose activation of the sympathetic nervous system, causing an increase in cAMP levels. This leads to higher body temperature and basal metabolic rate, stimulation of lipolytic processes (breakdown of triglycerides in adipocytes into free fatty acids) and increased energy levels.

Caffeine is a purine alkaloid, found naturally in the beans of coffee (Coffea arabica) and cocoa (Theobroma cacao). It is the most popular psychoactive substance in the world. Caffeine is known for its stimulant effect. In addition, it has other properties, including the stimulation of fat burning.

Caffeine blocks adenosine receptors, which leads to, apart from inhibition of adenosine activity, higher secretion of neurotransmitters such as dopamine, adrenaline and noradrenaline. As a result, it has a stimulant effect, reduces fatigue and boosts concentration, which allows you to exercise more and maintain high training intensity, thereby increasing energy expenditure.

Caffeine has also beneficial effects on metabolism. It increases total metabolic rate and stimulates thermogenesis and lipolytic processes. This is mainly because it has an inhibitory effect on cAMP phosphodiesterase. As a result, levels of cAMP, which regulates the rate of lipolysis, are higher.

DMAA (1,3-dimethylamine) is a compound commonly referred to as geranium, which is undoubtedly the most potent ingredient of the product. This substance, also known as methylhexanamine and geranamine, is a stimulant of the nervous system. It has a different mechanism of action from caffeine, which also boosts the activity of DMAA.

Geranamine has a very similar structure to adrenaline. It stimulates the adrenergic system, thereby increasing the secretion of catecholamines. It boosts thermogenesis and enhances concentration, motivation and physical performance.

Synephrine is an alkaloid which occurs naturally in the fruits of bitter orange (Citrus aurantium). It stimulates α-adrenergic receptors and has thus similar effects to ephedrine. Synephrine may also interact with β3-adrenergic receptors which are found in the adipose tissue. Their stimulation enhances cAMP levels and lipolytic processes. Because of that, synephrine acts in synergy with caffeine. In terms of dieting, it is also important that synephrine helps curb appetite.

Yohimbine is an indole alkaloid, which, like synephrine, also acts on the sympathetic nervous system. Nonetheless, it has another target, i.e. it blocks presynaptic α2-adrenergic receptors. Yohimbine is particularly recommended to fight so-called stubborn fat and in the last phases of body fat reduction. In addition, it boosts libido and sexual performance.

Cinnamon is a spice obtained from the bark of Cinnamomum. It has numerous health benefits and one of the most important ones is that it regulates carbohydrate balance. It has been demonstrated to have antidiabetic properties and regulate blood glucose levels. For instance, it is suggested that cinnamon improves the sensitivity of insulin receptors, stimulates the uptake of glucose by insulin dependent glucose transporters (GLUT-4) and inhibits gluconeogenesis.

Glucose-insulin balance and therefore normal blood sugar levels are important in order to reduce excess body fat and maintain a healthy body weight. This is because insulin is released in the body in response to an increase in blood sugar levels. As an anabolic hormone, insulin helps transport fatty acids into adipocytes, thereby increasing body fat percentage.

Piperine is an alkaloid which is an active ingredient of black pepper (Piper nigrum). It enhances thermogenic processes. The unique feature of piperine is that it has an inhibitory effect on adipogenesis. It has been observed that under certain conditions it may inhibit the differentiation of adipocytes by reducing the expression of PPARγs.

What is more, studies show that piperine makes it easier to reduce body mass and may improve the lipid profile – it has been demonstrated to lower levels of triglycerides, total cholesterol, LDL and VDL and boost HDL levels.

To sum up, Fast Burner allows you to quickly and very effectively reduce excess body fat and maximise energy levels and physical performance during a workout.
________

In order to ensure optimum efficacy of active ingredients, it is important to maintain proper hydration of the body. If you want to regulate carbohydrate balance even more effectively, it is suggested to reduce the consumption of foods with a high glycemic index and replace them with products with a low and medium glycemic index.

Safety above all else

Due to the high content of substances with energising effects, it is recommended to discontinue other stimulants (e.g. coffee and tea). Because of that, do not take the product in the evening – it may make it difficult to fall asleep.

The product may raise blood pressure and that is why it is not suitable for persons with cardiovascular diseases.