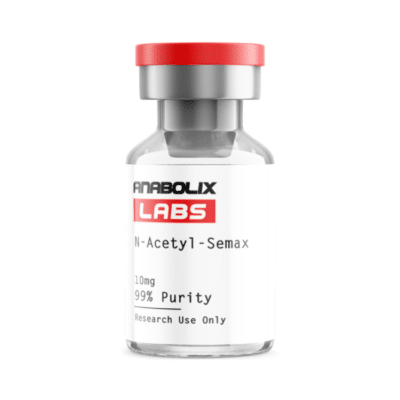 Reduces the negative effects of stress

Increases BDNF levels in the brain

Reduces the feeling of pain

Reduces the symptoms of ADHD

N-Acetyl Semax is a peptide substance based on a fragment of the adrenocorticotropic hormone (ACTH). In terms of stimulation, it is the strongest derivative of Semax – it supports mental endurance, motivation and energy. It has a positive effect, especially on strengthening cognition, brain regeneration and improving memory.

Used to prevent and treat circulatory disorders, including strokes. As a nootropic substance and a cognitive enhancer, it reduces the negative effects of stress and improves memory performance.

It protects the body from oxidative stress
N-Acetyl Semax prevents oxidative damage throughout the body, especially in the brain. It has been proven to prevent liver damage from chronic stress, after stroke or heart attack, and from exposure to lead in the brain

N-Acetyl Semax – better memory
N-Acetyl Semax has been proven to improve concentration, memory and reduce the time needed to study. This is due to the brain’s increased resistance to oxidative damage and improved cerebral circulation.

Increased resistance to stress
By preventing the increase in the production of liver enzymes resulting from exposure to chronic stress, it reduces the negative physical and mental reactions of the body.

Increased BDNF levels in the brain
BDNF is a brain-derived neurotrophic factor that is key to cognitive development, neuronal survival, and synaptic plasticity. Its low level may result in deepened depression and anxiety.

N-Acetyl-Semax normalizes the reactions related to the feeling of stress and helps relieve anxiety and depression.

Increased pain resistance
By preventing the breakdown of enkephalins, which regulate the body’s response to pain, it reduces the severity of pain experienced by people using Semax.

It reduces the symptoms of ADHD
Its use results in the improvement of memory and an increase in the number of neurotransmitters, the low level of which is a common symptom of ADHD.